Welcome to the world of Colin the Caterpillar

With millions of loyal fans, Colin the Caterpillar is a national tasty treasure. Scroll down to explore delicious sweets, the much-loved original cake and next-level-tasty recipes 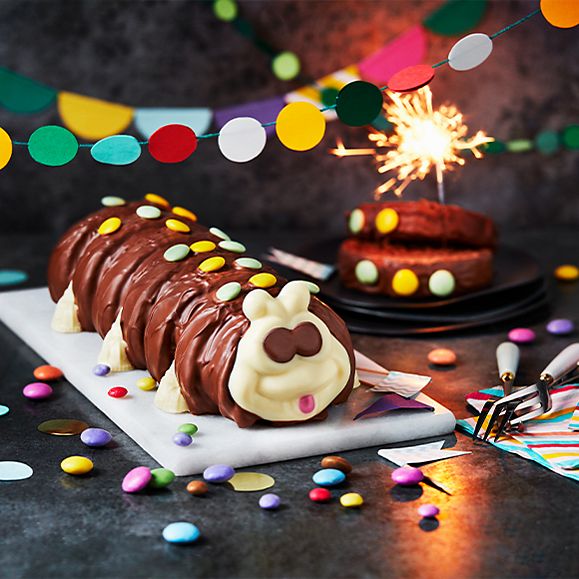 The original and the best

From office parties to weddings and online celebrations during lockdown, Colin is EVERYONE’S go-to party favourite! Our signature Colin the Caterpillar chocolate cake was launched in 1990 and since then we have manufactured more than 15 million Colins. We were the first to retailer to sell a caterpillar, with many supermarkets since trying to emulate this crowd-pleasing cake.

Wondering what makes Colin so unbelievably tasty? He is packed full of chocolate – 23% milk and 11% white – and his face is lovingly hand-piped. In the range of cakes, there’s also Colin’s girlfriend Connie the Caterpillar, mini caterpillars and an extra-large version.

Pick up a Colin the Caterpillar cake and other sweet treats in store.

Bake up a storm with Colin

Introducing our new Colin the Caterpillar cookie dough! The ready-to-bake mix makes four delicious extremely chocolatey cookies without the mess and stress. And to top it off? White choc mini Colin faces and colourful beans to decorate. The mix is suitable for vegetarians and is gluten free.

Pick up the Colin the Caterpillar cookie dough in the chilled aisle now. 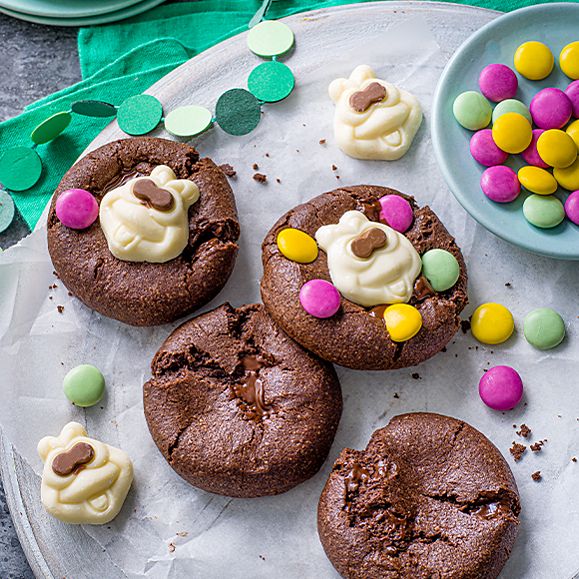 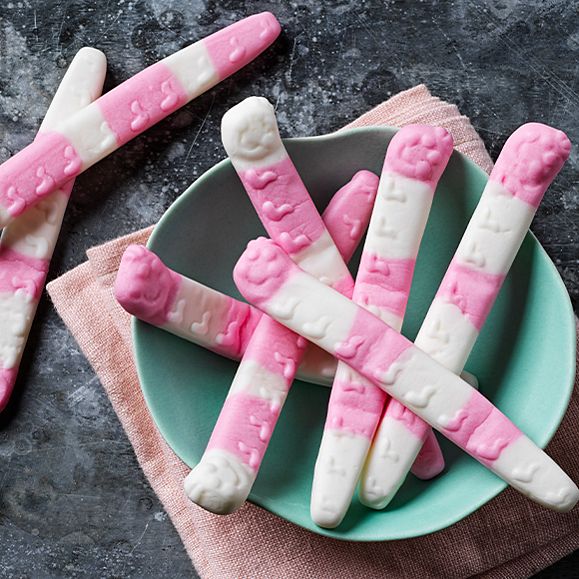 Our new veggie Colin the Caterpillar softies have just landed in store. The raspberry- and milk-flavoured gummies are gelatine free and part of our 2 for €4 deal.

Find the softies in store now.

Just in time for celebrations in the garden, our new Colin treats have landed in store! Pick up our rich chocolate cupcakes topped with chocolate buttercream, colourful sprinkles and a mini choc Colin face. Or take tea breaks to the next level with our Colin the Caterpillar button biscuits, which have a smooth filling and a milk choc and sprinkle topping. Finally, discover our Colin the Caterpillar cake jars – layers of chocolatey goodness and topped with a mini Colin face.

Explore our full range of Colin-tastic delights in store now. 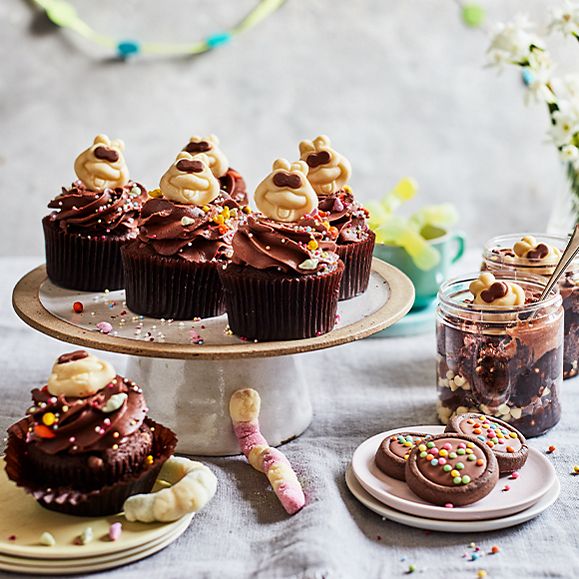 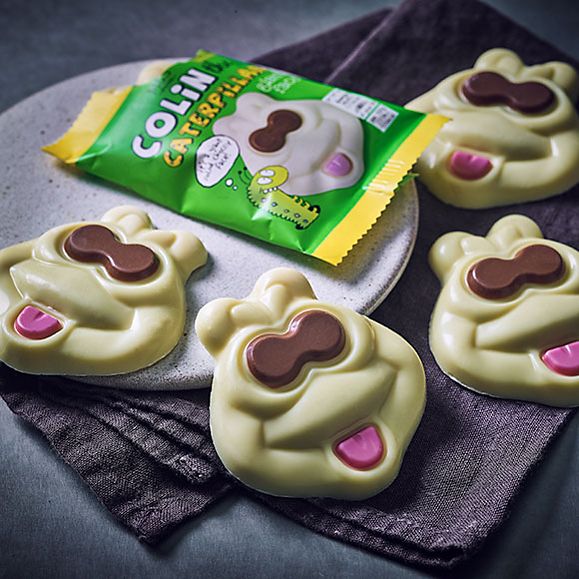 Fghting over the face is now a thing of the past!

Colin fans, rejoice: we’ve put an end to birthday envy by packaging up the most fought-after section of the cake – the white chocolate face – in a cute treat pack! The GIANT face is the ultimate sweet snack or ideal for making your very own Colin cake or our Colin trifle, below.

Pick up a giant Colin chocolate face in store now. 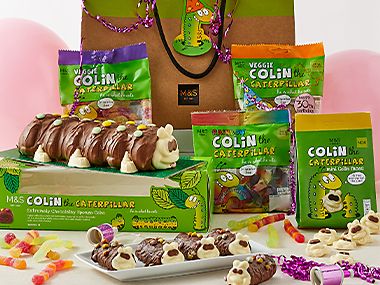 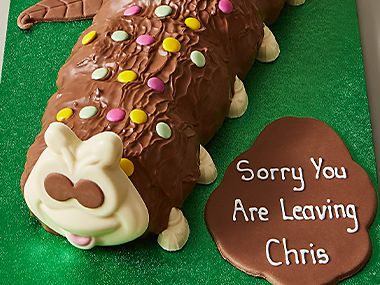 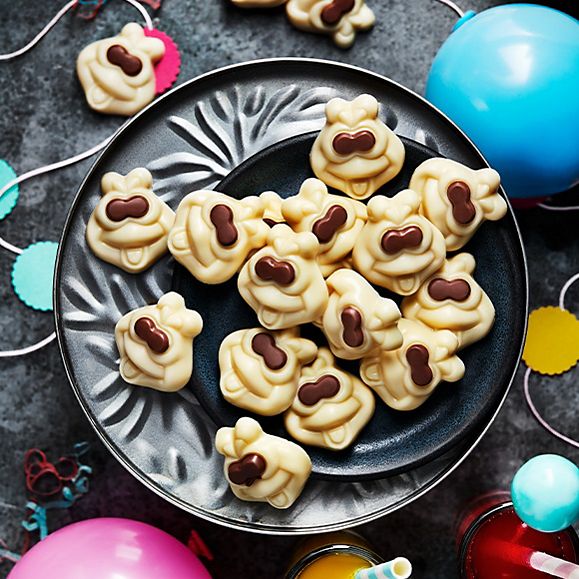 Created to celebrate Colin’s 30th birthday, our mini Colin faces are perfect for sharing... or keeping entirely to yourself. Plus, discover our delicious Colin recipe ideas below that star this sweet treat.

The ultimate Colin the Caterpillar trifle

Carefully arrange the slices of Colin cake in a deep glass trifle bowl, placing 2 on the bottom and 4 around the sides so you can clearly see the swirl.

For the chocolate custard, place the custard and 100g of the milk chocolate into a large saucepan over a low heat. Stir gently until all the chocolate has melted, then remove from the heat. Press clingfilm on to the surface of the custard to stop a skin forming, then set aside to cool.

For the chocolate mousse, microwave the the remaining 200g milk chocolate on a low heat, stirring occasionally to avoid burning, until melted. Meanwhile, semi-whip 300ml of the whipping cream until soft peaks form. Fold in the melted milk chocolate until fully incorporated. Pour the mousse evenly into the trifle bowl over the Colin slices – depending on the size of your bowl you may have a small amount left over. Chill.

For the white chocolate ganache, soften the white chocolate by microwaving for 1 minute on a medium heat. Meanwhile, heat 100ml of the whipping cream in a saucepan on a low heat, until simmering, then immediately pour over the softened chocolate chunks, and leave to stand for 5 minutes. Beat with a fork until the mixture is smooth and coming together. If it looks tough and isn’t workable, heat the mix on low in the microwave for 20 seconds at a time, beating with a fork until smooth. Spread evenly over the chocolate mousse. Chill for 15 minutes.

When the mousse has set, remove the trifle from the fridge and pour over the chocolate custard, allowing for enough room to add cream on top.

To decorate, beat the remaining 200ml whipped cream until fully whipped, spread evenly over the custard layer, smoothing out to the edges. Top with M&S Jazzie sprinkles, mini Colin faces and the large Colin face. 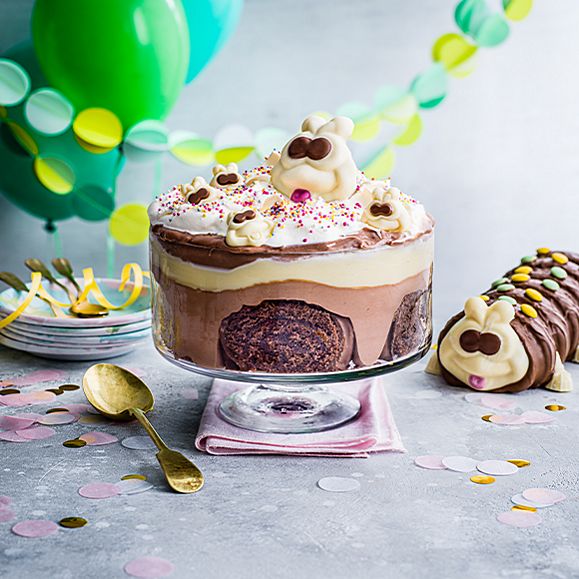 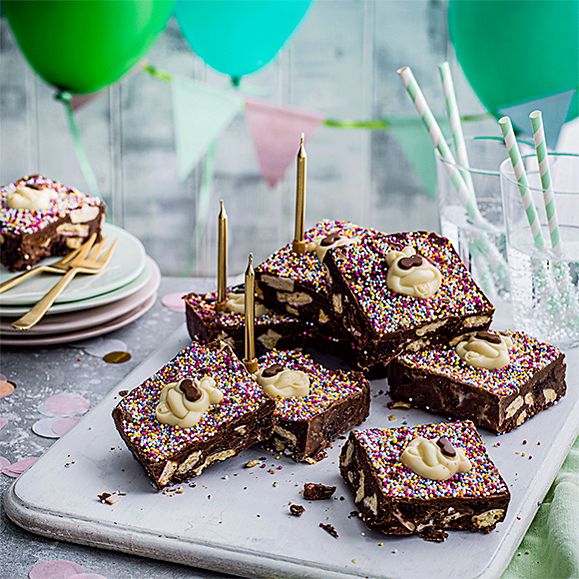 Put the iced party rings in a freezer bag and bash with a rolling pin until you have 5-pence-sized pieces.

In a large saucepan over a low heat, melt the milk chocolate and butter, stirring frequently to avoid burning. Melt until no lumps remain. Allow to cool for 5-10 mins.

Stir the crushed party rings, brownie pieces and white chocolate chunks into the chocolate-butter mix until everything is fully coated.

Press the mix into the lined baking tin, smoothing until even. Sprinkle with Jazzie sprinkles and top with mini Colin faces, spaced apart so that later you can cut the fridge cake into pieces that each have a face.

Put in the fridge and chill for a minimum of 4 hours before cutting into pieces.

This deliciously moreish cookie dough is easy to prepare and perfect for parties, picnics and indulgent late-night snacks.

Put the flour in a microwaveable bowl and heat on high for 60 seconds, stirring every 15 seconds to avoid burning, until an
internal temperature of 75°C/167°F is achieved. Allow to cool.
(This step is important as there’s a risk of using raw flour, heating kills any potential bacteria.)

In a large bowl, cream together the butter, caster sugar and golden syrup until light and fluffy.

Sift in the cocoa powder and cooled flour, then whisk until combined. Add the milk and continue to whisk until smooth. The mixture should now resemble cookie dough.

Stir in milk and white chocolate chunks and ¼ of a jar of Jazzie sprinkles.

Gently fold in the brownie pieces, being careful not to overmix as they’ll break down.

Scoop the dough into a bowl and decorate with mini Colin faces before serving. Chill in the fridge if you prefer a firmer cookie dough. 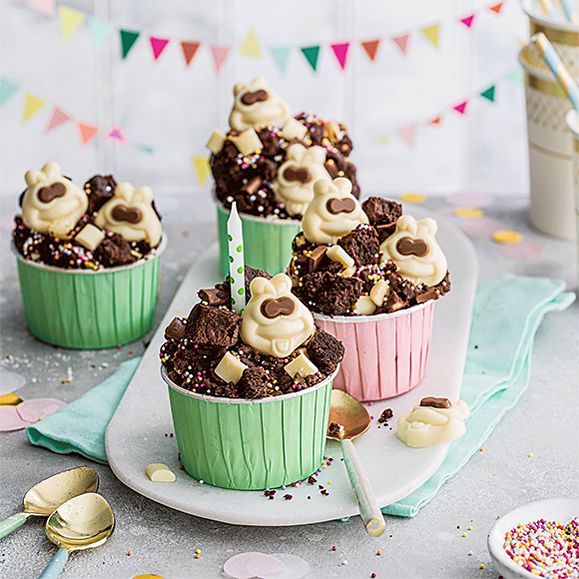 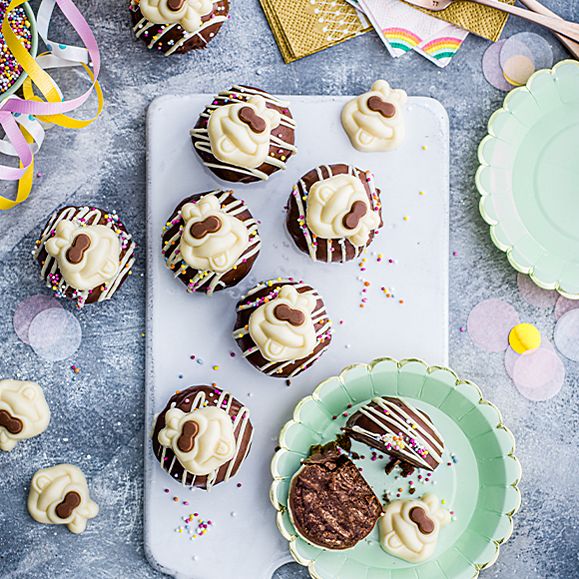 Made from just five ingredients, our Colin truffles are easy to prepare but are guaranteed to impress your guests.

In a large bowl, crumble the Swiss roll with your fingers until the mixture resembles breadcrumbs and starts to come together.

In a small bowl, microwave 50g milk chocolate on a low heat, stirring occasionally to ensure that it doesn’t burn, until melted. Pour on to the crumbled Swiss roll and stir until the mix binds together and becomes mouldable.

Using your hands, roll the mix into 8 even-sized balls. Place on a baking tray lined with greaseproof paper and chill in the fridge for 15 minutes.

In a small bowl, microwave the white chocolate until melted. Use a knife to carefully flick the melted white chocolate over the top of the cake balls to form stripes/streaks. Top with Jazzie sprinkles.

Carefully dot the remaining melted white chocolate onto the backs of the mini Colin faces and stick these to the tops of your truffles. Chill for a minimum of 2 hours until set.

Brighten up your day with our new rainbow Colin the Caterpillars. Each limited-edition pack is filled with fruit-flavoured Colins, hearts and rainbows.

Pick up a pack (or two) when you’re next in store. 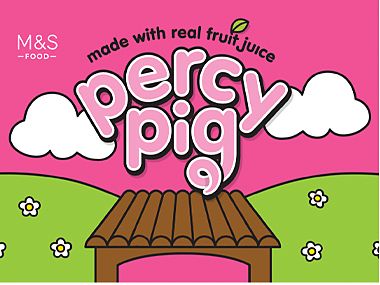 Read all about our iconic pink character and his family and friends, and learn more about our range of Percy Pig products 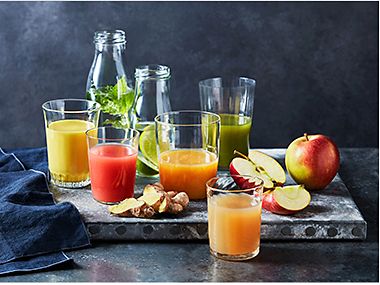 Time for a health kick? 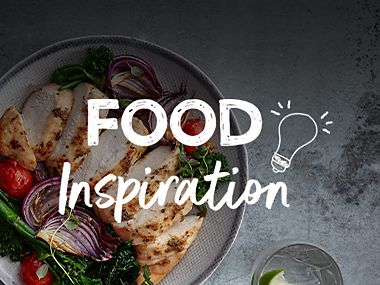 Discover delicious recipe inspiration, tips and tricks from our food editor, plus the latest news from the Foodhall