BE A BBQ
MASTER 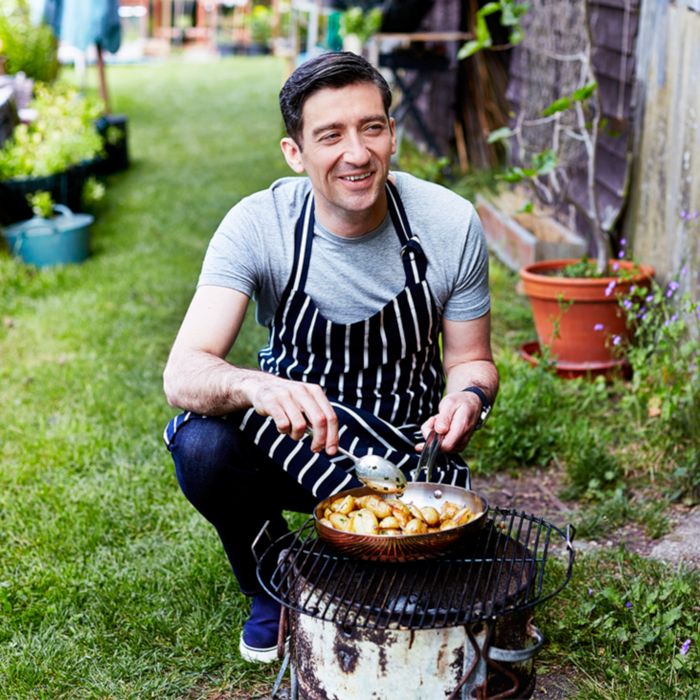 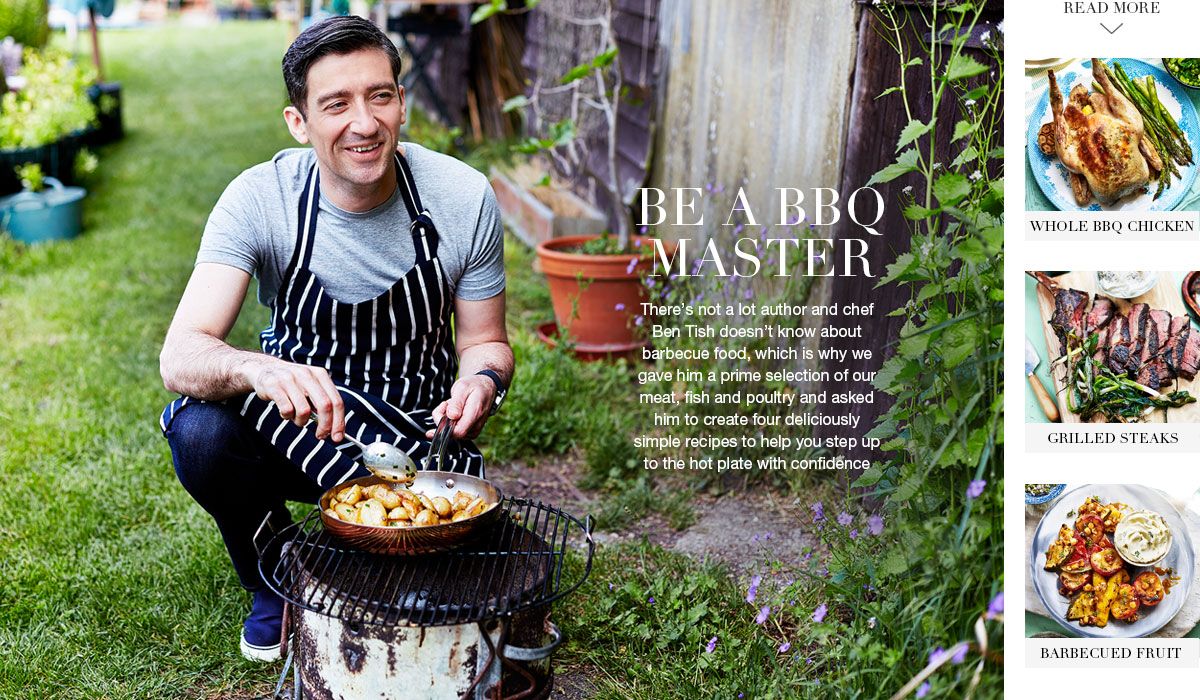 There’s not a lot author and chef Ben Tish doesn’t know about barbecue food, which is why we gave him a prime selection of our meat, fish and poultry and asked him to create four simple recipes to help you step up to the hot plate 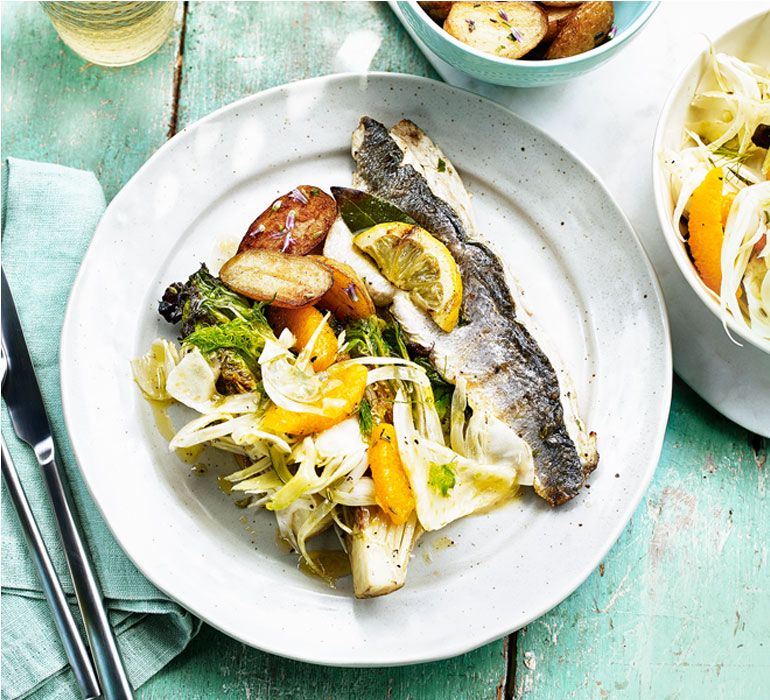 Method: When the barbecue coals have turned ashen grey, place the grill over them and wait until it gets hot.

Cut two heads of baby gem into quarters and toss with olive oil and seasoning. Place them on the grill until lightly blackened, then reserve at the side of the coals.

Season and oil four sea bass fillets. Place skin-side down on the grill and cook for three-to-four minutes until they’re lightly charred and flip them over to cook for a further minute. Rest for a minute in a warm spot.

Toss the gems with one finely sliced fennel head, the segments from an orange, a few sprigs of dill, one teaspoon of fennel seeds, a splash each of orange juice and vinegar, and a glug of olive oil. Season to taste and serve. 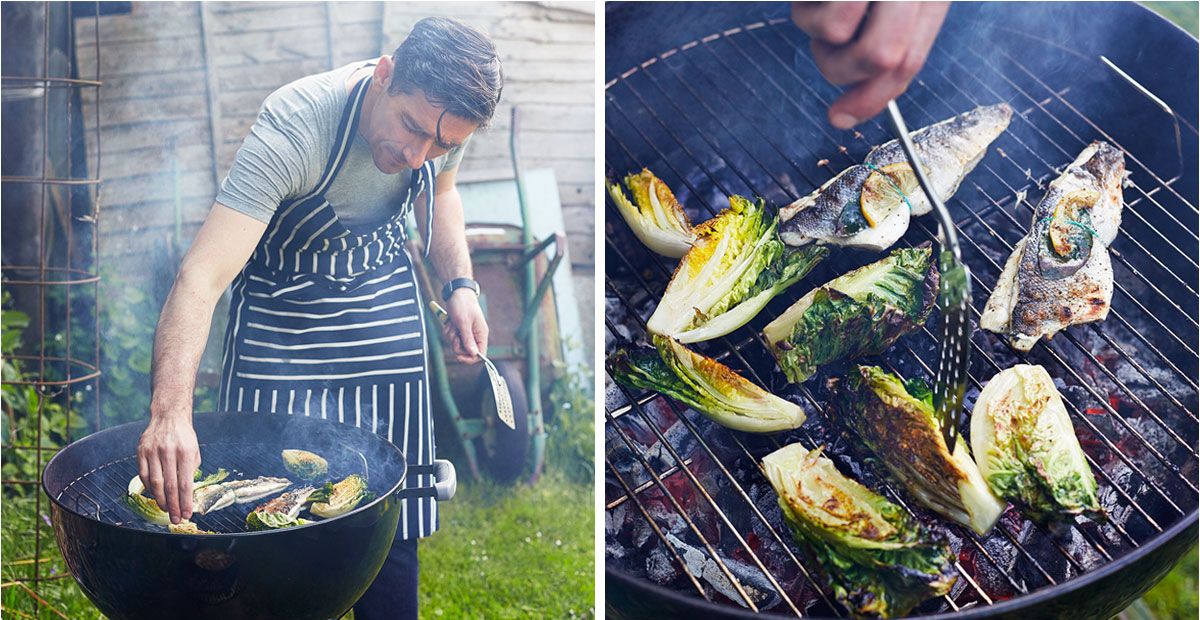 “I started barbecuing with
my dad when I was about
nine. It wasn’t so much
about the food (it was
mainly sausages and
burgers and well-done
steak) – but the barbecue
coming out always
meant good times” 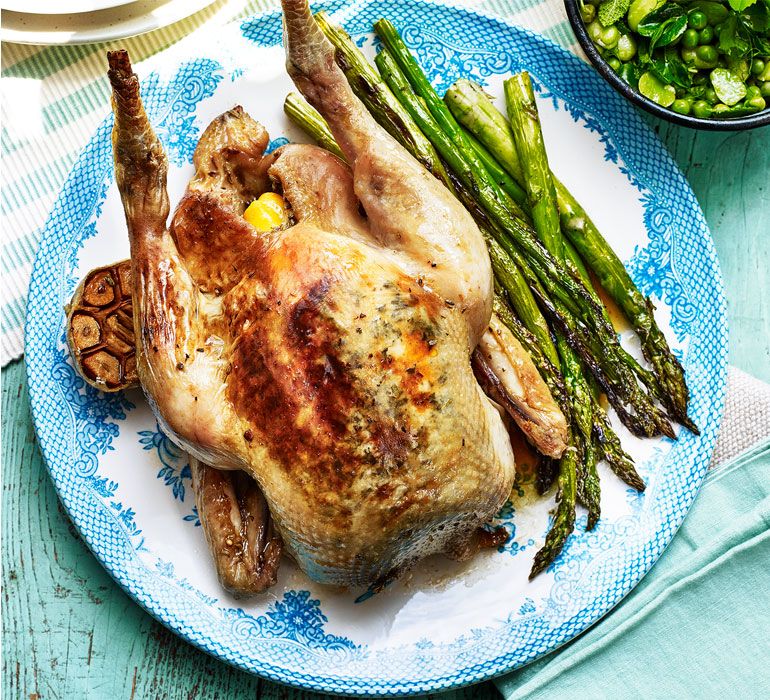 Method: To make the brine, combine 200g coarse sea salt, 100g caster sugar, four bay leaves, two teaspoons each of coriander and fennel seeds, the zest of two lemons and one sliced red chilli in a pan with 2.5l water. Bring to the boil, then remove from the heat and cool.

Season and place onto a cooking tray next to the coals and close the lid. If there’s a vent, ensure it’s half-open. Cook for around one hour 20 minutes until browned and the juices run clear. The internal temperature should read 77⁰C for one minute.

Leave the chicken to rest for 20 minutes before serving. You can deglaze the tray juices with some wine or water to make a fantastic smoky gravy. 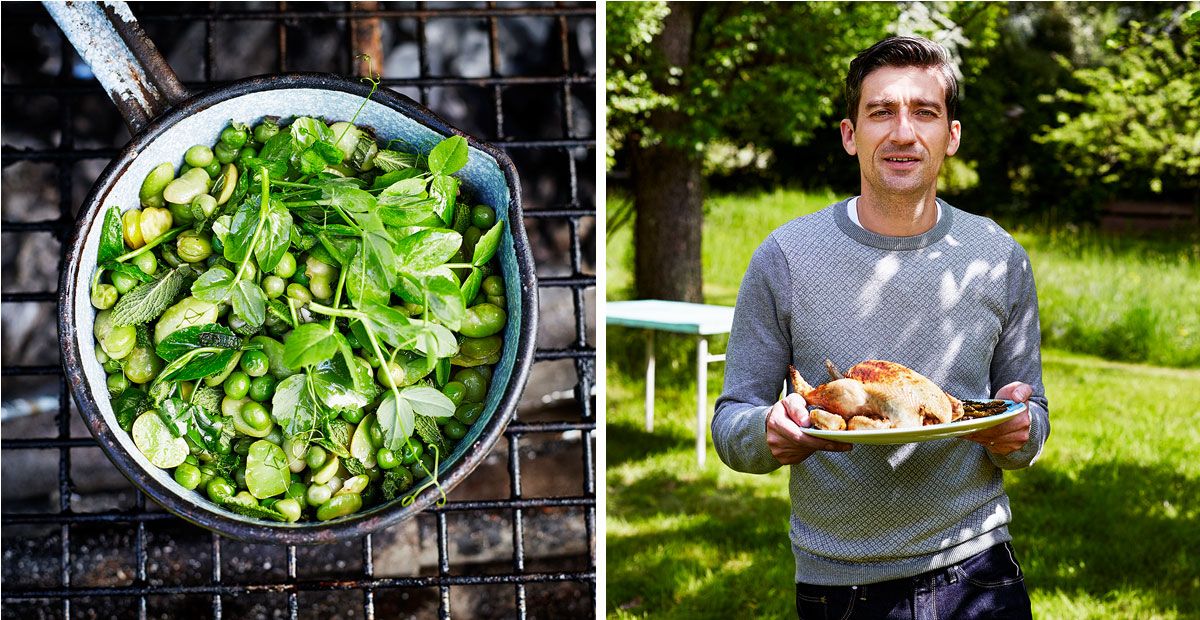 “The perfect cooking
temperature is when
the flames have subsided
and the coals are ashen
grey. Wrap root veggies
in foil and place in the
embers to roast” 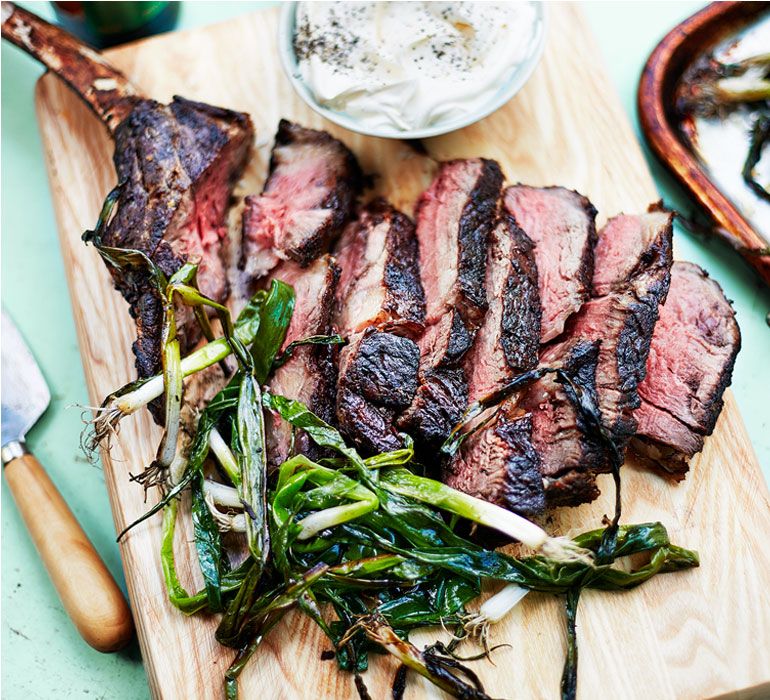 “Perfectly cooked
medium-rare steak
has a ‘slow spring back’
when you poke it.
Rest your steak for half
the time you cook it”

Method: Mix two tablespoons of smoked paprika, one tablespoon of cumin, three chopped garlic cloves, one tablespoon of red wine vinegar and around 70ml olive oil to make a paste. Season two tomahawk steaks and rub on the paste. Leave to marinade for at least two hours or overnight.

Light your barbecue and allow the flames to subside. When the coals turn ashen grey, it’s time to cook. Sear each steak for four minutes each side (at this stage you could throw some wood chips onto the coals for a smoky boost) and then move to the side of the grill.

Toss a bunch of spring onions in olive oil and seasoning and add to the grill. Cook for three-to-four minutes until just tender and blackened. Move to join the steaks and close the barbecue lid. Cook for a further five minutes and then rest the steaks for a couple of minutes before slicing. Serve with a dollop of crème fraiche. 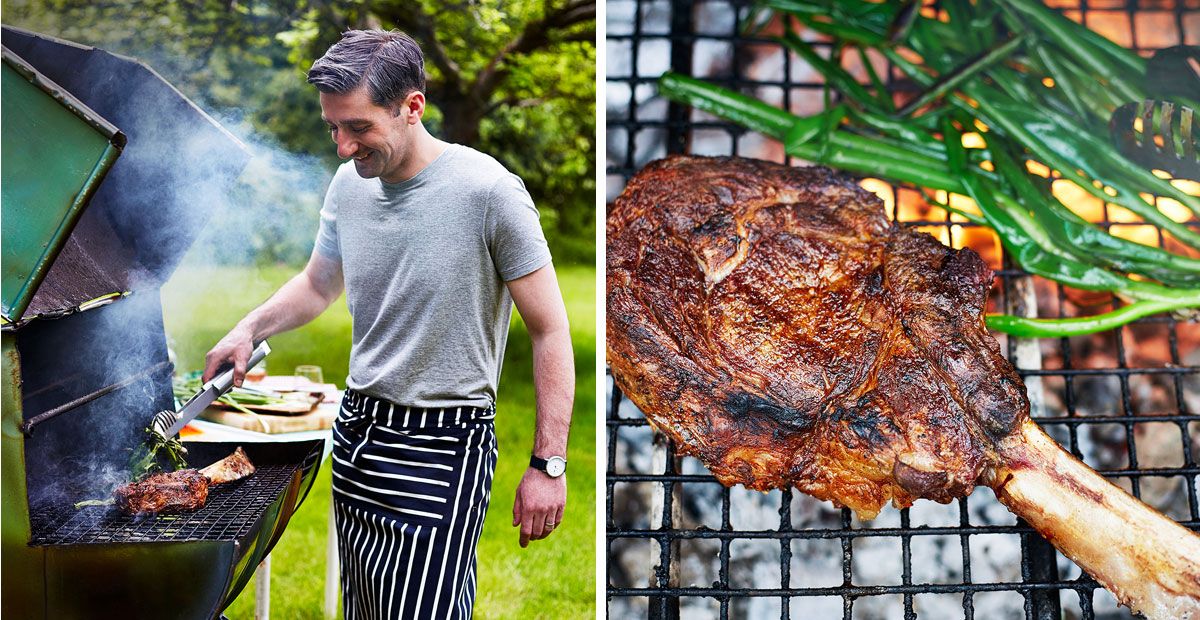 “Tomahawk steak is an
impressive cut of meat. The
big bone conducts heat so it
cooks evenly and stays
tender. Match with strong,
spicy hints to bring out the
intense flavour of the beef” 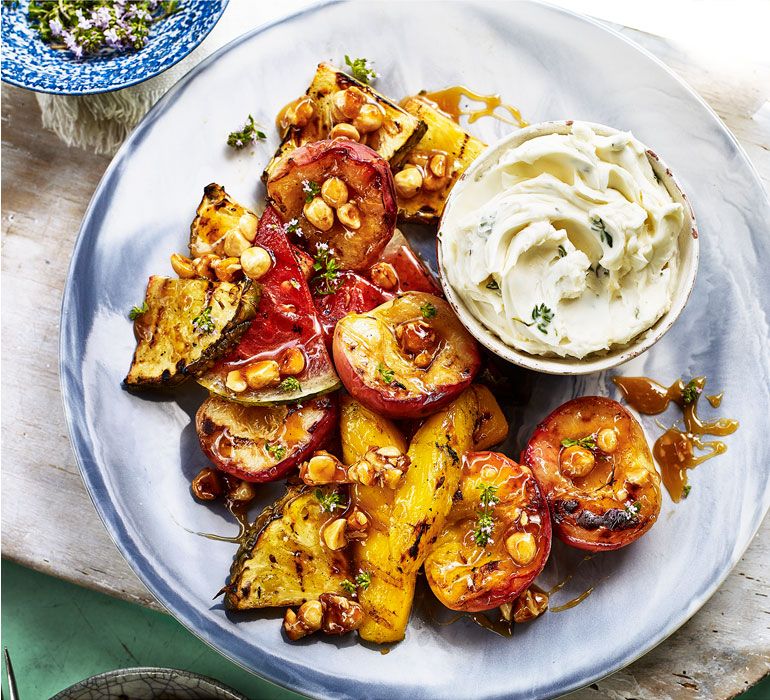 “Cooking fruit on a
barbecue means the
natural sugars
caramelise and intensify.
The char gives their
sweetness some edge”

Method: Leave fruit (try peaches and pineapples) uncovered at room temperature for an hour before cooking to dry it out a little. Light the barbecue and place a grill over the ashen coals to get it really hot.

Mix 100g mascarpone with 50g caster sugar and half a bunch of chopped thyme leaves and set aside.

Mix 70g caster sugar with 20ml water in a small sauté pan and place on the grill to the side of the coals until it turns a deep golden caramel. Throw in 60g hazelnuts and a pinch of sea salt and toss to coat. Keep warm and reserve.

Put the thyme stalks on the coals to smoke. Grill the fruit for three minutes until charred and soft, before turning it to cook for a further two minutes on the other side.

Serve with the mascarpone, caramel and a sprinkle of smoked thyme. 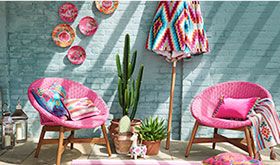 Get the Look
Get set for summer
Read & shop 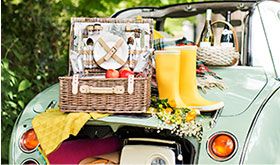 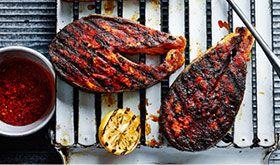 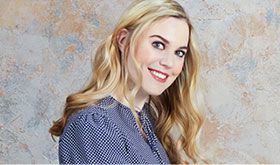